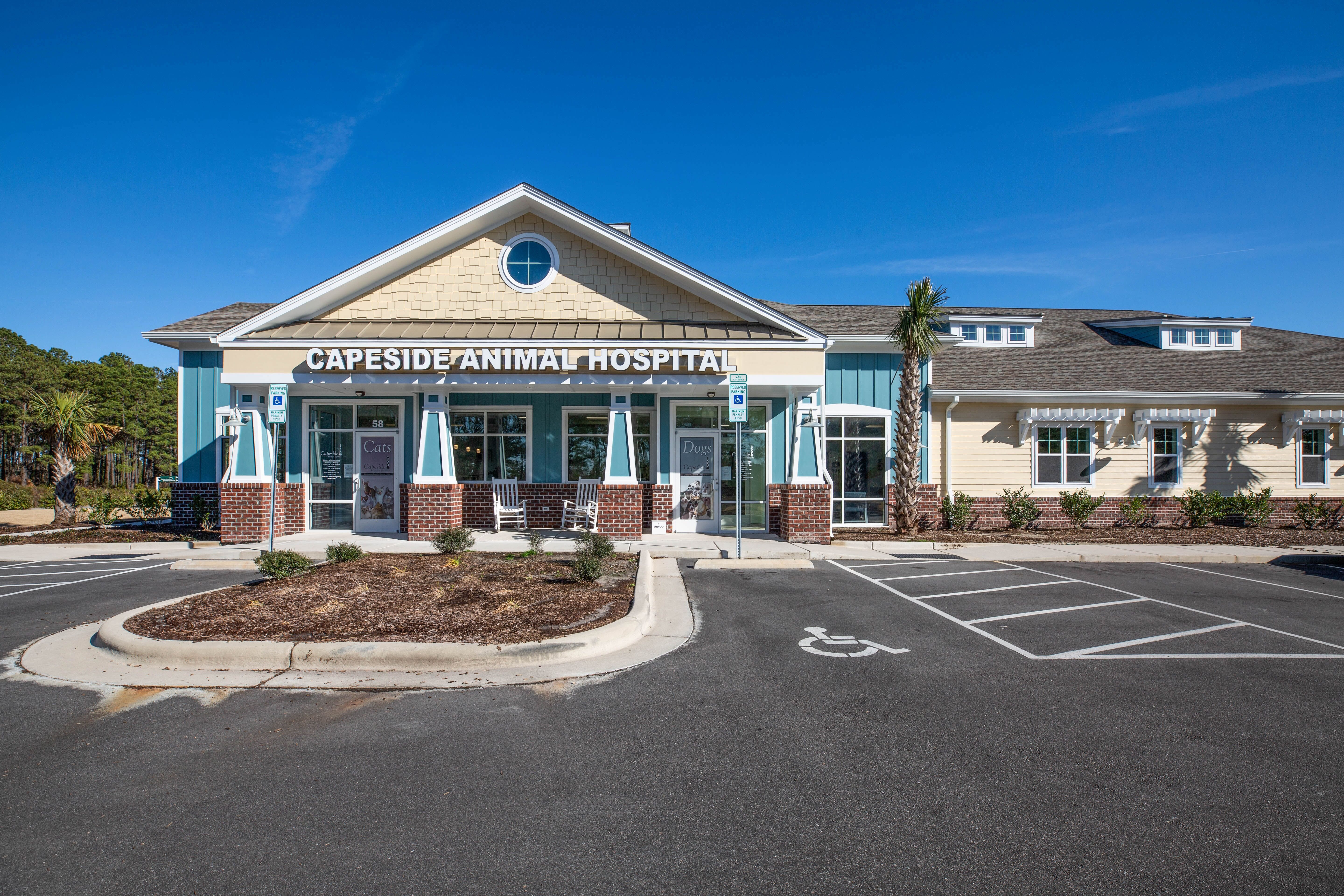 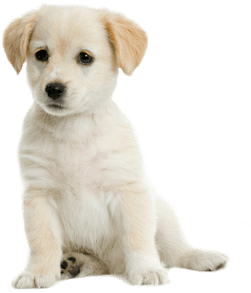 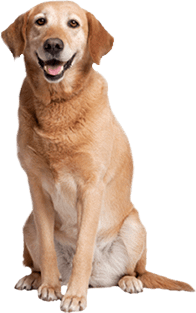 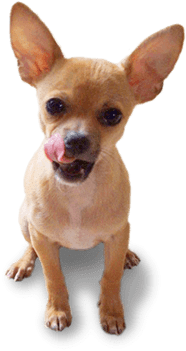 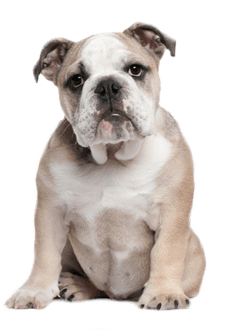 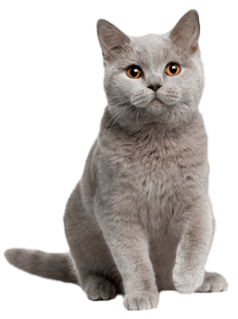 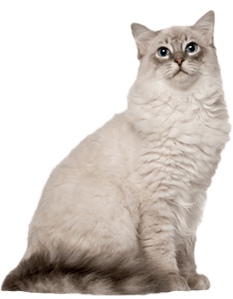 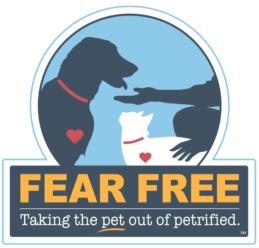 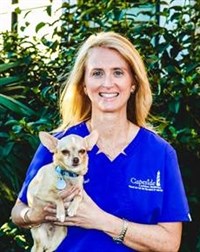 Wilmington native, received her Bachelor of Arts in Chemistry from the University of North Carolina, Wilmington in 1992. Pursuing her life long goal, she then attended North Carolina State University and obtained her Doctorate of Veterinary Medicine (DVM) in 1996. Following graduation, she completed an internship in small animal medicine and surgery at Coral Springs Animal Hospital in Florida. She practiced in Florida and in Charlotte before moving back to Wilmington in 1999. She worked as an associate veterinarian for 5 years and then decided to fulfill her dream of opening her own animal hospital. She established Capeside Animal Hospital on March 8, 2005. 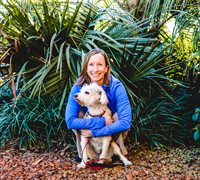 Dr. Christine Carmine completed her Bachelor's Degree in Animal Science in 2000 from the University of New Hampshire, and her DVM degree in 2005 from the Atlantic Veterinary College in Prince Edward Island, Canada. After graduating, she moved to North Carolina to flee from the cold and be closer to family. From an early age, Dr. Carmine knew that she wanted to be a veterinarian. She attended "vet camp" during high school, and worked as a veterinary assistant during her undergraduate and graduate studies. Dr. Carmine is proud to be Fear Free and Human-Animal Bond Certified, and is passionate about providing high quality care for her patients and pet parents. She and her husband, Jay, share their home with their wonderful fuzzy faced kids. In her free time she enjoys yoga, crossfit and triathlons, reading, writing and traveling. Dr. Carmine spent her younger years moving frequently, including a number of years spent living in Switzerland. She is fluent in German and Swiss-German.

An Iowa native, Dr Rubendall attended Iowa State University and obtained her DVM in 2002. She moved to Chicago where she practiced veterinary medicine for 10 years. It was during this time she became interested in alternative veterinary medicine and studied Chinese herbal medicine. She became certified in 2011 in Veterinary Chinese Herbal Medicine through the International Veterinary Acupuncture Society. She then studied chiropractic services at the Healing Oasis in Wisconsin and became certified in Veterinary Spinal Manipulation Therapy in January 2012. She decided to get away from the cold winters and moved to Wilmington in the Spring of 2012. She did relief work in the area and enjoyed working with the staff at Capeside Animal Hospital and was happy to accept a part time position. Dr Rubendall lives near Carolina Beach with her husband Eric and their Boston /French Bulldog mix named Hula and their two cats. 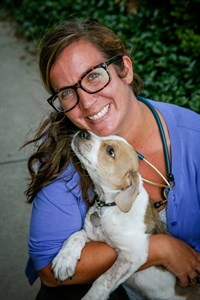 Dr. Hayley Bush has returned to eastern North Carolina to start her career as a veterinarian. After graduating from UNCW in 2007 with a Bachelor of Arts and Science in Biology and Spanish, Dr. Bush went south-way-south-to New Zealand to pursue her dreams of becoming a veterinarian. Dr. Bush spent 5 years in New Zealand studying, traveling, and working with a wide arrange of animals, most memorably spending summer vacations working at a large sheep station as a junior shepherd. Despite incredible experiences abroad, the NC native was ready to venture back home to be closer to family, friends and her pups- Bear, Otis, and Dot. Dr. Bush is very excited to join the Capeside team and establish herself in the community! 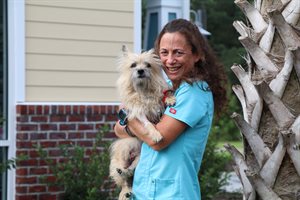 Dr. Winter is a true Wilmingtonian, having grown up in the area. She graduated from the University of North Carolina at Chapel Hill, as a Morehead-Cain Scholor with a Bachelor of Science with Honors in Biology. She then headed across the Triangle and received her Doctor of Veterinary Medicine from North Carolina State University. Having practiced veterinary medicine for 24 years in the Wilmington area, Dr. Winter is a professed "puppy and chihuahua lover" and enjoys the client education aspect of veterinary medicine. Besides pediatrics, her interests lie in dermatology, toy breed concerns and physical rehabilitation for soft tissue and orthopaedic issues. Dr. Winter combines that love with her own love of training and coaching and is a 17 time Ironman finisher. She enjoys swimming, cycling, running and more and is an active member of the Wilmington endurance community. She shares her Wrightsville Beach home with Charlie, and 6 of the cutest dogs; Moose, Tommie, Danni, Holly, Baby Daisy, and Fiona. 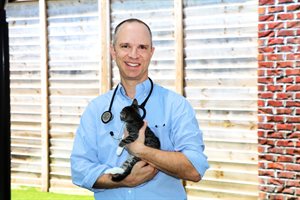 Dr. Morgan Farrell was born in Columbia, SC and also lived in New Jersey and Rhode Island while growing up. He returned south for college and earned his undergraduate degree from Davidson College followed by his DVM from North Carolina State University College of Veterinary Medicine in 2007. Over the past ten years, Dr. Farrell has dedicated the focus of his medical career to helping maintain patient quality of life and treating clients' pets as if they are one of his own. Dr. Farrell enjoys getting to know clients and their pets during visits so that he can custom tailor a medical plan for them. Dr. Farrell is interested in internal medicine and loves feline medicine in particular. When not at work, Dr. Farrell spends his time with his wife, Christine and his young son, Kai. Dr. Farrell is also an avid triathlete, open water swimmer, surfer and loves to travel.

Dr. Jeff Phillips is originally from the Baltimore area. He graduated from the University of Maryland with a Bachelors of Science degree in Zoology. After graduation, he did 3 years of research at John's Hopkins, investigating new medications to combat organ transplant rejection. He then did a one year stint in Nepal studying the mating habits of mountain yeti and search for clues as to the whereabouts of the abominable snow beast of Tibet.

On his triumphant return to the US, he decided to return to school  and got his degree in medicine and surgery at the Virginia-Maryland Regional College of Veterinary Medicine. He practiced his craft for 21 years in southern Maryland. After living in close proximity to Washington, DC, he decided to relocate to the warmth and beaches in Wilmington. He worked for 2 years in Wilmington before joining  the team at Capeside Animal Hospital.

Dr. P has more than 25 years of experience in veterinary practices. His area of interest include feline medicine (member of the American Association of Feline Practitioners for 25 years) and soft tissue surgery.

Away from the hospital, he enjoys fitness activities like weightlifting and yoga. He is an avid fan of baseball (go Nats!) He commits as much time as possible underwater, scuba diving in the Caribbean and Florida Keys. In downtime, he enjoys gardening and reading with his crew of 4 cats and 2 dogs (when they permit it) and honing his dry and strange wit to a razor's edge. 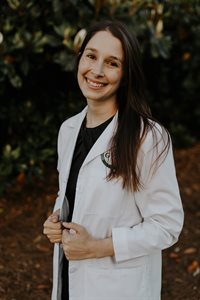 Dr. Jennifer Deardorff grew up in Athens, Georgia. She obtained a Bachelor of Science in Chemistry from Georgia College and State University in 2016. She then returned to Athens to graduate with her DVM from the University of Georgia College of Veterinary Medicine in 2020. She had always dreamed of one day moving to the coast to start her journey as a veterinarian and is so excited to join the Capeside team! In her down time Dr, Deardorff enjoys spending time with her fiance Garrett and their three dogs. 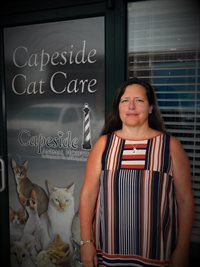 I'm Jeannie. I have lived in Wilmington, NC since 1997 with my fabulous husband and our two grown children, and three grandchildren. I have several four legged, furry friends that still reside at home. My passion for animal welfare started as a child and has developed into a career that has finally landed me at this wonderful animal hospital with veterinarians that TRULY care about our clients.

I was born and raised in the small town of Edenton, North Carolina, and cannot remember a time in my life that I did not have pets. I volunteered at the local animal shelter throughout high school, and landed my first job at our town's only animal hospital as a kennel technician where I knew that helping animals was exactly what I wanted to do. I currently reside in Leland with my wonderful family and have one human child - Adison and our other kids, "Kiwi" the parakeet, "Kuechly" the kitty,  and two rescue dogs, "Roscoe" and "Peyton".  I am looking forward to many more years with our awesome staff, clients, and patients here at Capeside! 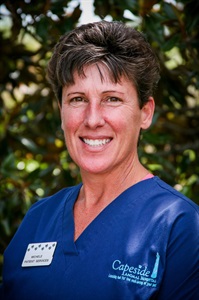 My name is Sierra Lee and I am a Registered Veterinary Technician. I graduated from Gaston College where I earned my A.A.S. Veterinary Technology Degree and aquired my Veterinary Technician Registration from NCVMA shortly after. I have been working with animals since 2013 and can not imagine doing anything else. My hobbies outside of work consist of spending time with my stubborn German Shepherd, exercising and relaxing at the beach. I also enjoy seeing and learning new things. I hope to further my education whether it be in animal medicine or other areas and I intend to travel as much as possible someday. 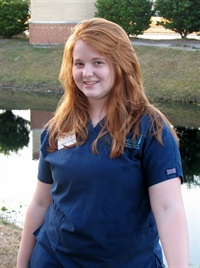 Hello, my name is Heather, I was born and partially raised in Leland. I was raised by my grandparents, who were truck drivers, on the road and even though I spent much of my childhood on the road, animals were never far from my heart. I have had all sorts of animals! Currently, my household consists of two Jack Russell mixes, "Tia" and "Leo", a Chinese Crested named "Toshi", and a feline named "Prissie". I also have two freshwater aquariums and two ball pythons! I look forward to meeting all of your wonderful pets and treating them with the same admiration and fascination as all of the pets I have had the pleasure of meeting! 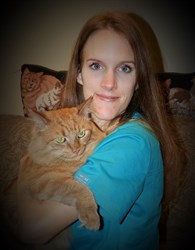 I grew up in this area, but moved to Greensboro about 20 years ago. In my own pet family I have Mimi and Lilah, who are pictured with me, and two spoiled cats, Vanna and Lottie. I am proud to say all of my kids are rescues! In fact, both Lilah and Vanna I adopted through Furever Friends Animal Rescue here locally. When I play at some of my favorite pastimes such as fishing and camping I bring my furry little puppy shadows along. I have a passion for Veterinary Dentistry and am a Certified Veterinary Dental Technician, through the American Association of Veterinary Dentistry. Recently I received my CVA II certification as well as attended the Chi Institute in Florida for study in assisting our Doctors in Traditional Chinese Veterinary Medicine. On my return home I'm proud to have joined the Capeside Team and look forward to meeting all of you and your pet families!

My name is Tasha and I moved to Wilmington in 2004. My love for animals started when I was a child. I strive to make the grooming experience as stress-free as possible. I believe it is a must to have a great deal of patience and trust, as well as the ability to read a dog or cats body language. I understand that your pet is a member of your family and will treat each and every one of them with a tender, caring hand. Working with animals and making them beautiful for their owners is extremely rewarding!! I look forward to meeting you and your furry family member!